Background of this Wiki

Rise of the Salton Sea
Jump to navigation Jump to search

This article is not part of the 2101 Solarian Edition of Wikipedia. It was added to clarify the information published in this Wiki.

The material this site is based on was only recently discovered. It was extracted from several obsolete electronic storage devices used in a defunct government SETI research project. They were found inside fortified intermodal containers housed in a storage bunker at an abandoned military installation. The identity of the individual(s) who provided the description and location of the containers remains unknown.

The communiqué that lead to the creation of this Wiki was originally dismissed as a hoax. It described several fortified intermodal containers stored at abandoned military base. The containers supposedly held a large amount of equipment related to a government funded SETI research project from the 1960s. A map of the base and the containers location was included along with several damaged image files.

Hover mouse here for a brief background of SETI.

Exploration of Claims Made in Communiqué

The communiqué and map proved to be accurate. A storage bunker housing the fortified intermodal containers was located, just as the communiqué described. Most of the containers were packed with a range of items, including furniture, filing cabinets, and other office equipment. One was dedicated to electronic equipment, which held the "electronic storage devices". 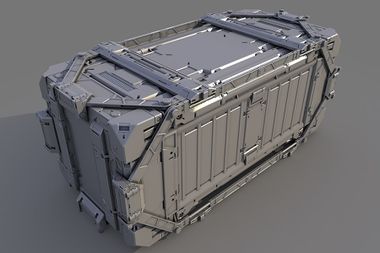 The communiqué also included details of the SETI research project. The research project's main task was searching for artificial radio transmissions from non-terrestrial sources and identifying their location. It was canceled after a few years without any significant findings. No public records have been located to confirm the existence of the project. The project predated NASA's involvement in SETI research by more than a decade. No additional information about disposal of the equipment was noted in the communiqué. Based on the evidence available, everything related to the project was put into storage and subsequently forgotten. 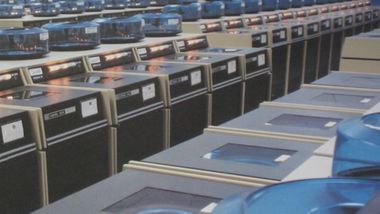 Labels on the "electronic storage devices" identified them as IBM disk drive units built in the 1960s. The units were removed and transported to a secure facility for further examination. All of the disk drives were tested and found to be functional. Because of their age and concern of mechanical failure, the data was copied to newer storage media to prevent data loss.

Analysis determined the disk drives contained raw digitized transmissions received by the 1960s SETI project's radio telescopes. A cursory examination of the data indicated it was random, non-repeating signals from natural sources, matching the findings of the SETI project.

Modern technologies not available in the 1960s allowed more granular examinations to be conducted. This revealed certain data segments that appeared to contain extended Fast Radio Bursts (FRBs). As more data was examined, other instances of FRB data segments were discovered. Without exception, the frequency and origin point of every FRBs was the same. Further examination of the FRB data segments suggested they were not random non-repeating signals, but a type of sophisticated encryption. The encryption technology was studied and after considerable effort a method of decrypting it was developed.

Parallax calculations were used to calculate the distance between the transmission location of the signal and Earth to be approximately 24 light years. Star charts showed no luminous celestial body at those coordinates and visual observations confirmed nothing was visible there. Radio telescope scans of the location did not detect any additional signal activity.